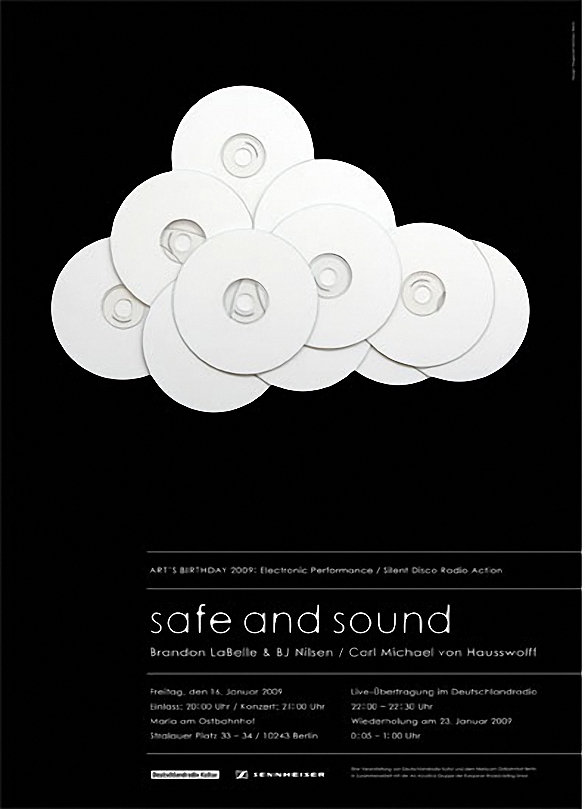 Brandon LaBelle & BJ Nilsen
“the music will not be broadcast”

Staged as a silent disco, the performance turns the actions of the dance event into a situational installation. Presented through wireless headphones, an electronic work is performed mixing experimental beats and found sounds, while live microphones amplify the movements of bodies back into the room through a set of speakers. The dance floor is incorporated into the composition, immersing building and body into an extended rhythmical event.

The EVP (Electronic Voice Phenomena) technique Spiricom was developed by Metascience Foundation in North Carolina in the early 70s. Thirteen sine wave tones between the frequencies 131 and 701 Hz are developed, combined and performed. Running these sine waves from a radio transmitter to a radio receiver enables people from “the other side” to communicate with the listeners. CMVH has, with good help by technician Jari Lehtinen, developed an instrument that can play thirteen sine wave tones at the same time and by pushing a button the machine randomly selects the tones.

Brandon LaBelle is an artist and writer working with sound and the specifics of location. His work has been featured internationally, including exhibitions and festivals Sampling Rage, Podewil Berlin, Sound as Media, ICC Tokyo, Bitstreams, Whitney Museum New York, and Radio Revolten, Halle Germany. His work on radio memory was shown at Casa Vecina, Mexico City this year, and he’s currently preparing a project for the MuseumsQuartier in Vienna on the theme of voice and eating.

BJ Nilsen is a sound and recording artist focusing primarily on the sound of nature and its effect on humans, and the perception of time and space as experienced through sound. In addition, he has worked for documentary film, television, and as a sound engineer. Nilsen regularly performs live around the world and in collaboration with Chris Watson, Fennesz, Stilluppsteypa, Hildur Gudnadottir, among others.

Carl Michael von Hausswolff lives and works in Stockholm, Sweden. As an artist, composer and curator, he has shown work in the biennials of Venice, Moscow, Istanbul, Santa Fe and Liverpool as well as in other places. His music has been performed at festivals such as Sonar, Ars Electronica and Stockholm Electronic Music Festival and has been released on LP, CD or DVD by labels such as Ash International, Errant Bodies, Laton and RasterNoton. He is the curator of FREQ_OUT which has been shown in Paris, Berlin, Copenhagen, Chiangmai, Oslo, Budapest and Kortrijk. He is a long time collaborator with Leif Elggren on the project “Elgaland-Vargaland”.